From Linux to OS X and back again! You’d think a title like that would hold the promise of an exciting blog post. I’ll let you be the judge of that. Fun Fact: Then creating a new Github repo, github will suggest a name for your new repo. I started keeping track of my meticulously groomed dotfiles on github and when I went to create the repository, a name was suggested to me. Thus, Octo-Tripping-Robot was born.

I started using Linux around 2010 when Cyanogenmod was developing version 5.0.8. I got my first Android phone, the HTC Incredible, and realized that all the “cool” kids were rooting their devices. The next step after rooting your Android was to install a custom ROM. The best ROMs were few and far between. You were either on Bugless Beast or Cyanogenmod.

I chose to run Cyanogenmod because it looked better and seemed to be more popular. It didn’t take long for me to realize that I’d be waiting for all the hot new features the developers were working on to be pushed into the “stable” branches. The “nightly” branch was where the magic happened, but lots of things were broken. I got into their IRC channel and started asking about the nightly builds and how I could run the latest builds.

Linux was the obvious answer for compiling and building the latest code from source. Since I had never used Linux before, Ubuntu was suggested to me and I was off and running. Soon, I realized Linux was much more than I thought it was. I discovered Conky and thought it was the coolest thing ever. Not too long after that, I was running Arch Linux and experimenting with tiling window managers like SubtleWM and Xmonad.

I switched to OS X when I got my first “real job” in IT at a broadcast station where every machine was a Mac. At first I despised all the Apple Inc. gear around as I was still a devoted Androidian. As time went on, my ultra-custom setups demanded my attention for staying up to date. I just wanted to get work done and Macs were the out of the box solution for exactly that.

I’d been using OS X as my daily driver since 2013. Easy to use, UNIX under the hood, fast hardware. Yet, something was missing. Something cool and edgy. There was no sense of personal touch or customization. Some of the commands did not behave the same on Linux, since OS X is a BSD based operating system.

Meaning: Making improvements to a system that don’t actually do anyone any good, and can sometimes have negative ramifications.

I had been “ricing” my desktop without even knowing it, back in 2010.

Ricing can be a timesuck if you really go through and tweak every little piece yourself. The Desktop Environment, the Window Manager, the Applications, Utilities, Vim, Bash or Zsh (or Fish), Weechat or irssi, the list never ends.

It can either end up looking really good, like this: 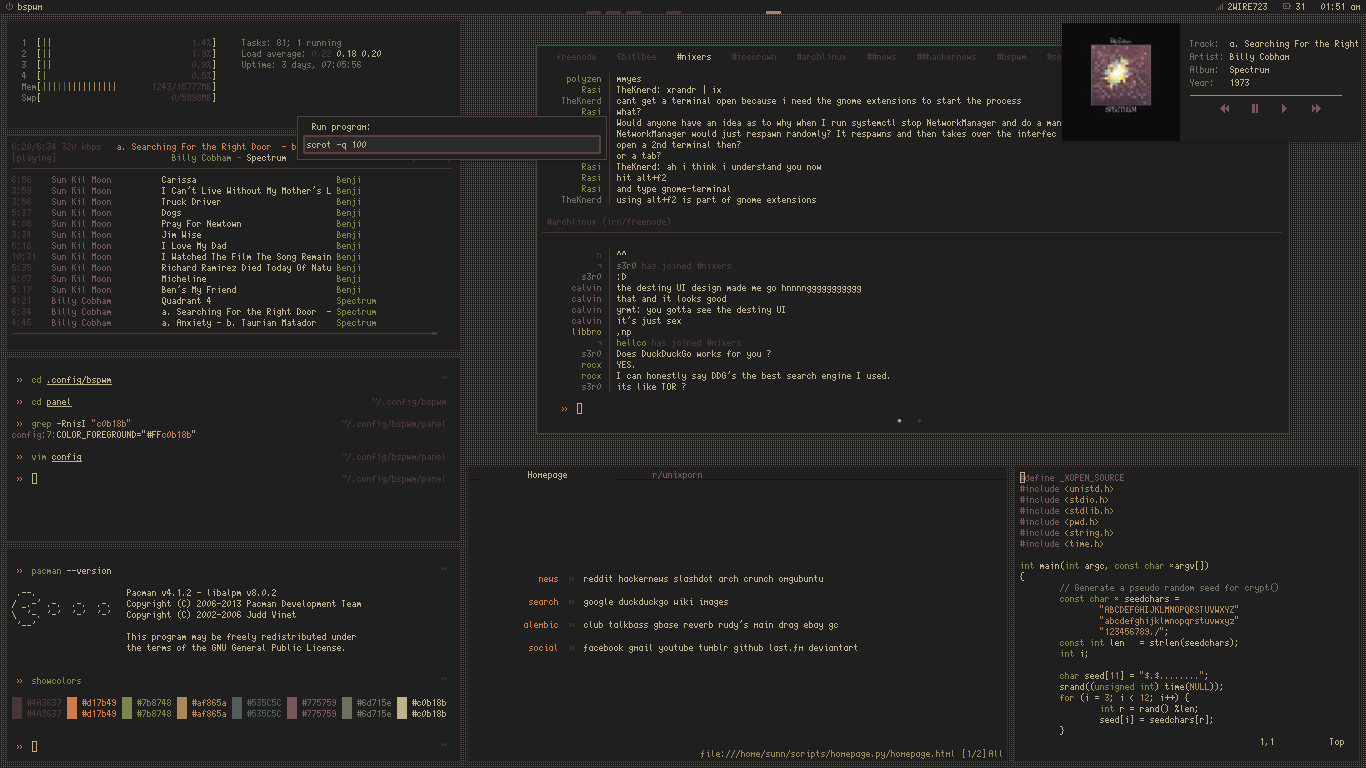 Or it can just end up being a huge waste of time where you waste hours of your life editing configuration files with a less than desirable outcome.

I still had “real” work to do and I didn’t want to devote that much time to learning the syntax of all the new hotness the good people of #rice use to get their desktops looking so fresh and so clean.

Fedora 22 seemed like a cool thing to get into. Mainly because it was RedHat and somewhat a “new” thing. A 4.x kernel and most of the software would be up-to-date. However, I ran into some issues with dnf, Fedora’s new package manager, and mirror speeds which, drove me insane. I also fought with Vim to enable lua support and although everything was working great in a full GNOME3 installation, nothing seemed to work correctly in a minimal install. Things like going into suspend mode when closing the laptop lid would just not work, when this had been working fine under a full, bloated install. This would not stand.

Ontop of that getting to the point of having an actual working desktop setup would be a long, treacherous path and I’d be staring the timesuck issue in the face again. Spending hours tweaking on configuration files and getting everything looking good or at least reasonable. Then I’d have to work on the functionality… Forget it!

neeasade is this super nice guy I met in #rice that ended up having a very good looking Arch setup running:

Along with that came some nice GTK themes (which I’m changing to my liking), very nice fonts like DejaVu Sans and Droid Sans.

He’s got scripts that’ll clone his dotfiles repo and tie all of those relevant files to your homefolder using symlinks, backing up any conflicts. Exceptionally simple to have a nice, useable, somewhat custom setup within a few mintues. In fact, it’s just a simple one liner:

Using his dotfiles as the framework, I’ve only had to make a few small changes to make the setup my own. Chaning the backgrounds and editing a few scripts was all that I needed to make the setup good enough to be my daily driver.

You can see the desktop in action here: webm

Be sure to stop by my Github to see screenshots and grab the latest version.